A sunny forecast and plenty of enthusiasm for sea cliffs saw me heading Pembrokewards this weekend with Young Dan, Jon, Sophie, Simon, Claire and a huge cast of friendly others. After much slaloming through the wilds of Mid-Wales, we arrived at the vast Vicar's Field campsite, with it's luxurious single portaloo facilities (but corresponding bargainous price and proximity to the pub). It was a beautifully clear night, and we stayed up later than was wise drinking whisky and spotting shooting stars.

Saturday morning found Jon, Simon, Claire and I heading to Mother Careys. After a slight false start heading down a dirt track to oblivion, we managed to locate the car park and thence the crag, and Jon and I made a bee-line for Sea Groove. We scrambled round to the base of the route under the impressive White Slab, and I bambered up it in a lovely long single pitch. There was even some mild jamming as an extra treat.

Suitably warmed up, we decided to get on with one of the weekend's principle objectives, namely Inner Space. As a veteran of such recent crazy adventures as Skeleton Ridge on the Isle Of Wight, Jon wasn't too perturbed by the rather terrifying look of the first pitch, and duly set off. For those of you not familiar with the route, it starts in a huge cave, climbs 20m or so up to the roof, and then back and foots sideways across the top of the cave for 20m in a position of extreme exposure, to reach a welcome belay on a chockstone right at the top of the cave mouth. A bit like this, in fact: 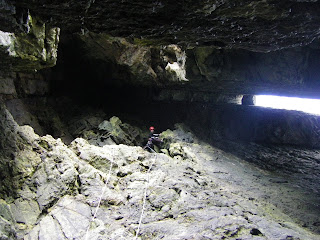 Mercifully there was plenty of gear, and even a few holds on the traverse, but it was an impressive piece of climbing, and a pretty mind-boggling situation to be in. After joining Jon on top of the chockstone and celebrating our continued aliveness, I led the short, but very exposed second pitch to the top, where victory brownies awaited (of the edible chocolatey kind, rather than cheerleading girls), and the slow process of letting the type II fun set in began. I think the traverse might be the most type II fun I've had at one time.

Full of calories and keen for more adventures we abseiled back down and boulder-hopped round to the base of Rock Idol. I'm not really one for steep climbing, but the line looked amazing, and it was reputed to be low in the grade. The rumours turned out to be well founded, and luckily there were loads of rests to be had en route (including a proper sit down one in a cave), as well as bountiful gear and some epic handholds. The crux roof had a few less holds than I was hoping for, but tactical deployment of a sly jam soon had me back in vertical territory. It was a pretty satisfying feeling belaying from the top looking down to see how much the route seems to overhang the start. My first Welsh E1, and a good 'un too. After that the team headed to Pembroke for fish and chips, and the pub for beer and plenty of socialising.

On Sunday we header to Stennis Head, and got things underway with a group traverse to the base of Stennis Arete and Stennis Chimney. Jon set off up the arete whilst I marvelled at the improbability of the E3 Sophie was climbing on the other side of the zawn. Next we headed down for a crack at The Bludgeon, but there was a team in situ, so we removed ourselves to the base of Hercules, and I set off up it hoping the name wasn't too appropriate. It turned out to be pretty strenuous, but the steep bits were overcome by bridging, so my arms just about lasted the course, aided no-end by two (count 'em) proper sit down rests on ledges. Win. Between the rests the route was pretty sustained, and the crux was a very commiting feeling step right (although with brilliant gear), but thankfully the angle relented soon after and the upper groove was a juggy delight. Some epic posturing whilst bridging above space round the capping roof was had, and then some more satisfied belaying. 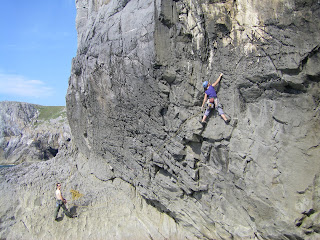 Sophie on Grey English Wimpout/A Walk On The Wild Side

After these exertions Jon and I fancied some slightly less strenuous amusement, so we abseiled down to the base of the Myola slab, and Jon romped up Myola, which proved to be excellent after a bit of tricky offwidthing at the very start. I then led the neighbouring VS, Myopia, which was a bit of a challenge of routefinding, picking the easiest route up the slab. The gear was a little less than obvious, and there was a rather spicy runout near the top, but thankfully the sanctuary of the grass was soon reached. At this stage I was very glad to have 60m ropes, as the belay stake was some way off, and the prospects of any other meaningful gear amongst the shattered rubble and grass wasn't very bright.

In the evening light we finished off the weekend by dragging our weary arms up Quickstep, a very pleasant little route, and after laughing at Sophie and Dan's swimming antics, we set off for home, via some very stodgy pizza and lots of thankfully deserted roads.

All in all a very productive trip, and I've got lots of Pembroke-psyche for a return to hopefully tick off a few more classic HVSs and E1s. Cool For Cats, Straight Gate, The Arrow and Lucky Strike in particular look pretty sensational.
Posted by Victim of Mathematics at 13:46 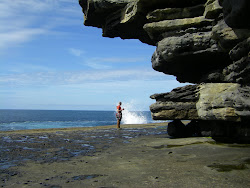